High rate algal ponds (HRAPs) are low-cost, nature-based technologies that can be successfully implemented in locations where weather conditions are favourable for microalgae growth (e.g. high solar radiation and temperature). They consist of shallow raceway ponds where microalgae can grow using up the nutrients still present in the feed water (low quality water such as wastewater effluents). Microalgae also release oxygen during photosynthesis, used by heterotrophic bacteria to oxidise and degrade organic matter. This symbiosis leads to the production of clean water as a by-product, and at the same time, to the growth and production of algal biomass that can be further stabilized, processed and converted to bioenergy (biodiesel and/or biogas) or biofertilizer (Benemann et al., 2013; Chisti, 2013; Thomas et al., 2016). Further advantages have been recently presented, such as the production and intracellular accumulation, under specific growing conditions, of different added-value products such as glycogen, bioplastics, lipids or terpenoids, that can also be recovered from microalgae (Arias et al., 2018; Khetkorn et al., 2017; Van Den Hende et al., 2016). 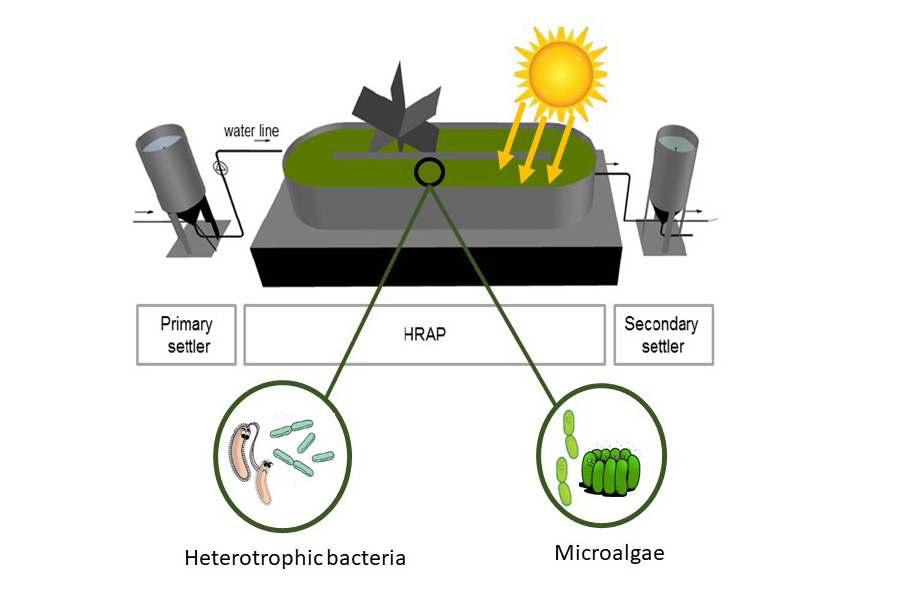 High removal efficiencies for NH4+-N, COD and BOD have been reported for urban wastewater (primary and secondary effluents), agricultural and industrial wastewaters (Gutiérrez et al., 2016; Park and Craggs, 2011; Van Den Hende et al., 2016). Recent Works have also demonstrated good removal efficiencies for organic micropollutants such as personal care products, hormones, pharmaceuticals or plasticizers. Their longer hydraulic residence times (HRTs) (usually several days vs hours of CAS), favour slow kinetics biodegradation. Other advantages to be highlighted are their high surface-area-to-volume ratio and subsequent higher sunlight exposures (enhancing the photodegradation of contaminants), the coexistence of autotrophic and heterotrophic microorganisms. that improves the biomass productivity (and removal by adsorption to biomass), as well as biodegradation by different phototrophic, chemoorganotrophic and chemolithotrophic metabolic pathways. Daily changes in pH, dissolved oxygen (DO) and redox conditions also improve the removal mechanisms of organic micropollutants in these systems (García et al., 2006). All in all, HRAP treatment could be considered as one of the most environmentally and economical favorable due to the reduced energy requirements and low costs compared to conventional activated sludge systems. They are suitable solutions for wastewater treatment, especially in areas with low population density, since they reduce costs and environmental impacts associated with wastewater treatment.

We use cookies on our website. Some of them are essential for the operation of the site, while others help us to improve this site and the user experience (tracking cookies). You can decide for yourself whether you want to allow cookies or not. Please note that if you reject them, you may not be able to use all the functionalities of the site.